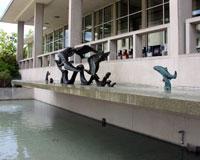 On the north, front side of the Joel Pritchard Building

In December of 1955, Paul Thiry, a well-known architect, was hired by the State to design a new Washington State Library Building for the capitol campus. Thiry’s $8.5 million, T-shaped building underwent construction two years later. To embellish the north, front side of the library, it was decided that a fountain would be included. Everett Du Pen, a sculptor of French and English descent born and raised in California, was selected to design and execute the fountain. Du Pen was prominent in the Northwest at that time for the public commissions he had done for places such as the Annie Wright Seminary (Tacoma), the Everett Theater, and a number of churches. Additionally, he had served as chairman of the University of Washington Sculpture Department since 1945 (a position he maintained until his retirement in 1983).

Du Pen’s design for the fountain was rich in symbolism, evoking images of the Pacific Northwest’s beauty. The piece features four sea gulls soaring above rippling waves, flanked by two leaping salmon. Behind the sea gulls, level with the waves, sits a small crab. These forms symbolize the vigor and strength of the state. The light, air, and water surrounding them represent Washington’s great natural resources and prosperous industries. Three water jets are positioned front and center in the fountain and spray water straight up into the air. Two more jets spurt water from supporting waves underneath the salmon.

The fountain’s central group was cast in copper-enriched bronze, chosen to complement the architecture of the library building, to weather well in the outdoor setting, and to increase in beauty as the patina on the surface becomes richer with age. Interestingly enough, at the time of the fountain’s creation there were no bronze foundries in the West large enough to deal with a sculpture of this size. Therefore, the fountain’s forms were cast in Brooklyn, NY and shipped to Olympia for erection. The whole group of figures weighs about 900 pounds and rests on a cantilevered basin. Water falls in a sheet from this top container to a pool lined with green terrazzo below. The flying spray in the top basin, contrasted with the quiet pool below, is intended to invoke a sense of movement which is furthered by lights that reflect off the bronze forms at night. The State Library Building, of which the Du Pen Fountain is considered a part, was dedicated on January 23, 1959.