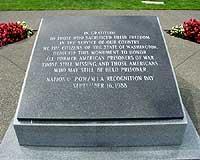 Directly east of the Winged Victory Monument on the west campus

This small marble memorial originally served as a Vietnam Veterans Memorial, and was dedicated as such on November 11, 1982 when then-Governor John Spellman placed a scroll listing the names of the state’s Vietnam casualties inside the monument. A granite lid with words honoring those Washingtonians killed in the Vietnam conflict enclosed the marble box. Many Vietnam Veterans were unhappy with the names of their fallen comrades being 'entombed' in this memorial, and soon began working for the erection of the Vietnam Veterans Memorial Wall—located south of the original monument and dedicated on May 25, 1987.

Numerous POW/MIA activist groups in the area soon encouraged the refitting of the old Vietnam Veterans Memorial to make it a monument honoring prisoners of war and those missing in action. As a result of their urging, the State Legislature took action that next year and approved the project. The original marble monument was refitted with a new granite top inscribed with words of gratitude for POWs and MIAs. Dedication ceremonies for the new POW/MIA memorial were held on National POW/MIA Recognition Day—September 16, 1988. The day’s events also included recognition of the POW/MIA flag that is regularly flown between the Legislative Building and the Temple of Justice. Following the afternoon ceremonies, a group of about 250 people held a 24-hour vigil in remembrance of those Washingtonians still missing in action. The vigil ended the following day with the release of commemorative balloons.