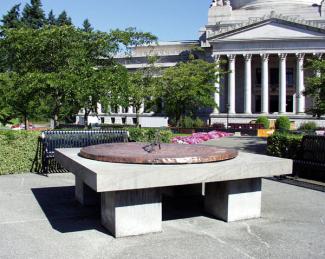 How to tell time on the sundial

The sundial's display of time differs from clock time due to location within the Pacific Time Zone, Daylight Saving Time, and astronomical variables throughout the year. The dial's gnomon is angled precisely at 47 degrees, Olympia's latitude, to point to the North Celestial Pole.

To reconcile the Sundial reading, refer to the table below. Select the closest date and add or subtract the indicated number of minutes. If Daylight Saving Time is in effect (shaded periods), also add one hour. 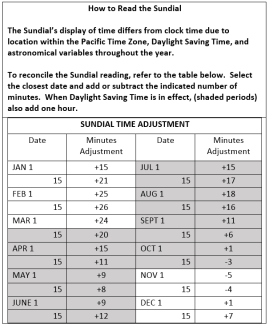 During construction of the new State Library in the late 1950’s, it was decided that a sundial would be placed directly north of the main entrance to serve as a focal point for the viewing of the building. John W. Elliot, a Seattle master craftsman who had done prior relief work on a number of public buildings in the state, was selected to design and execute the Territorial Sundial. Relief art is sculpture that projects forms from a flat background. Elliot’s magnificent hand-hammered, bas-relief sundial is made out of brass and measures six feet across (bas-relief is a specific type of relief where the protrusion of figures from the surface is very slight). It rests on a large slab of Wilkeson sandstone, the same material the library building is faced with, supported by four, one foot nine inch tall piers. The gnomon (the object that casts a shadow used as a time indicator) is made out of pounded bronze rods and features a letter 'N' to indicating the northern direction.

The surface of the brass sundial is divided into eight panels depicting important milestones in our territorial history. The historical theme of the piece is evident in the quote by Marcus Aurelius it displays—'Time is a sort of river passing events, and strong is its current.'

The first panel represents the discoveries of Captain George Vancouver in 1792. Vancouver’s group was one of the first to explore and chart Puget Sound (named after Peter Puget, one of the group members). Vancouver also christened many other important geographical landmarks in the area, including Mount Rainer and Vashon Island.

The second panel depicts the establishment of Fort Okanogan in 1811 by the John Jacob Astor’s Pacific Fur Company. The Fort was erected near the mouth of the Okanogan River in present-day central Washington, and served as a fur trading post with Native Americans.

The third panel shows the building of Fort Vancouver in 1825 on the north side of the Columbia River. This stronghold was constructed and headquartered by the English-founded Hudson’s Bay Company for many years.

The fourth panel depicts the Cowlitz Convention, 1851. It was at this meeting that northern residents encouraged the division of the land north and south of the Columbia River into two territories. A number of local pioneers, including Tumwater’s Michael T. Simmons, were influential in this important event.

The fifth panel gives testament to a large wagon train of pioneers who crossed Naches Pass in 1853. The group took this route as a shortcut to the Puget Sound on their way from the Yakima country, but quickly found the rough, Cascade Mountain pass to be a huge barrier to their progress. Many of the settlers had to kill some of their oxen and lower their wagons down the steep cliffs with rawhide ropes.

The sixth panel shows the Medicine Creek Treaty between the United States and Puget Sound Native Americans in 1854. The treaty, drawn up by Isaac Stevens, Superintendent of Indian Affairs for the Washington Territory, required that the Native Americans give up their lands and live in areas set aside for them. They were to be paid for the land they turned over, their rights to fish and hunt in specified areas were to be protected, and medical and other such services were to be provided by the U.S. government under the agreement. In return, the Native Americans were required to free their slaves, keep alcohol out of their communities, and not trade across the Canadian border.

The seventh panel depicts the first water-powered sawmill in Washington in 1828. Built by the Hudson’s Bay Company leader John McLoughlin roughly five miles east of Fort Vancouver, the mill constituted the first commercialization of lumber in the territory.

The eighth panel represents the first railroad connecting to Puget Sound, built in 1883 by the Northern Pacific Company. Much to the surprise and disappointment of Seattle and Olympia residents, Northern Pacific chose Tacoma as the outlet for this transcontinental line, which was a very small sawmill town at the time. 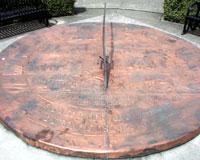