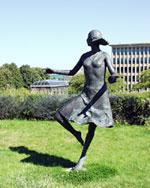 East Campus, near the Highway-Licenses Building and Office Building 2.

This eight-foot-tall, 450-pound bronze statue of a woman posed in mid-twirl was done by Seattle artist Phillip Levine at a cost of $17,000. The piece, as well as most other artwork nearby, was purchased with a one-percent allocation from the total cost of construction for East Capitol Campus (constructed between 1961 and 1976). Woman Dancing was actually one of the last sculptures added through the Art on the East Capitol Campus Project, joining such pieces as James Washington Jr.’s Mysteries of Life and James Lee Hansen’s The Shaman, both installed a number of years earlier.

Levine, who was born in Chicago but has spent most of his adult life as a Northwest artist, holds a fine arts degree from the University of Washington and is known the world over for his sculptures. Other examples of his work can be seen near Schmitz Hall on the University of Washington campus, as well as outside Burien’s Southwestern District Courthouse. Levine’s works have also been displayed in the homes of former King Hassan of Morocco, former Japanese Prime Minister Eisaku Sato, and many other commercial and private locations.

Woman Dancing took Levine nearly a year to complete and was cast at Fort Worden, WA. In creating the piece, Levine expressed his desire for the statue to 'counteract the tall, vertical force of the (surrounding) buildings without getting lost in the open spaces between them.' Also, the artist hoped his dancer would be in keeping with the large scale of the East Campus grounds around her, but still remain small enough so that viewers could relate on a humanistic level.