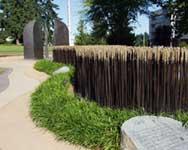 Northeast lawn of the west campus, beside 11th Avenue

This memorial was one of the first in the country to honor those who served in World War II, with particular focus on the nearly 6,000 Washington residents who gave their lives in battle. The project originated in 1995 when Washington’s Legislature appropriated $50,000 toward the cause. Olympia resident Simon Kogan was selected from among 42 entrants to design the monument.

Kogan, a Russian immigrant of Jewish descent, had always dreamed of building a commemorative work for this war that affected him so personally. His design was inspired by the first stanza of the song 'America the Beautiful,' and features a cluster of five, 14-foot high bronze blades, which bend into a form mirroring the shape of the capitol dome that looms behind. Each blade symbolizes one of the military units employed in the war and features shadowy images of servicemen. Upon close inspection, one finds that the ghost-like figures are actually formed using the etched names of Washington state’s war casualties.

One blade, rather than carrying the images of soldiers, depicts a mother holding an infant. The child’s shape, unlike the other figures, is not engraved out of names. This symbolizes future generations that were never born as a result of the war. The bronze blades are placed on a circular map of the world that indicates each of the war’s major battles with a bronze marker.

Beside the bronze blades, a winding river of 4,000 metal wheat stalks extends eastward. These stalks were originally intended to represent each of the state residents thought to have died in the war. However, during the time of the memorial’s construction, state officials identified an additional 2,000 casualties. The wheat field now collectively represents all those who died in the war. The wheat stalks were made from melted torpedo railings used on old U.S. warships, donated by the Bremerton Naval Shipyard.

Around the perimeter of the wheat sit five cut granite boulders are inscribed with the names of the major battles fought by year. Also surrounding the monument are engraved granite pavers that individuals purchased to help raise over $160,000 toward the $740,000 cost of the memorial. Many of these pavers contain personal messages. Messages can be viewed using an online tile search feature.