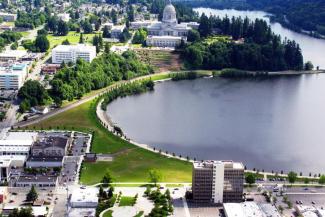 Metered city parking can be found on Water Street. There is also a parking lot at 701 Water Street SW, Olympia.

Heritage Park is a 24-acre state-owned park adjacent to the State Capitol Campus, Capitol Lake and downtown Olympia. It is the northern extension of the historic West Capitol Campus. It also serves as a symbol of our state’s commitment to community development in harmony with environmental stewardship. 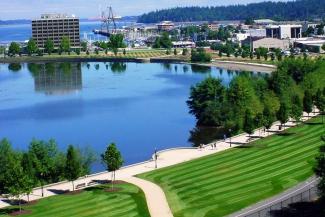 With its broad lawns and sweeping views of the Capitol, Heritage Park is a great place to hold festivals, performances, community activities, athletic events and more. A lawn amphitheater area is ideal for small performances and educational events. Ample parking and the amenities of downtown Olympia are right here. For more information:

The design of Heritage Park reflects the state’s intent that the park’s physical features, as well as the installations and interpretive programs it hosts, should represent Washington’s diverse heritage and culture.

Visit other state and local attractions

Planning for park development began in 1986, when the City of Olympia commissioned a study on the possibility of creating the space envisioned by capitol architects Walter Wilder and Harry White. The result was a contemporary interpretation of the 1911 design: a public park with a promenade aligned along a north-south axis from the center of the Legislative Building to Puget Sound. Though the park design has evolved considerably from the 1986 study, the historic axis serves as a central design feature of the park today.

Soon after this first study, the Heritage Park Development Association was formed. The association, composed of private citizens from across the state encouraged cooperation between the state and the city to promote continued planning and investment in the park. The group remains active today.

The first state funding for the park was authorized in 1991. It enabled the purchase of critical park property and funded further study. The Heritage Park pre-Design Study was completed in 1992, and serves today as the primary vision guiding ongoing park development.