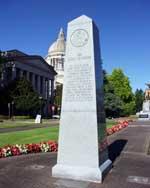 Northeast of the Legislative building, in the center of the west campus drive-around circle.

This monument honors those Washingtonians who have received the Medal of Honor, the highest distinction that can be awarded to a member of the Armed Forces of the United States. The medal is presented by the President (in the name of Congress) to those who have gone above and beyond the call of duty while serving our country. Throughout the medal’s history, fewer than 3,500 individuals have received this supreme honor—mostly after their deaths.

The monument is a replica of the WA State Medal of Honor Obelisk located in the Medal of Honor Grove in Valley Forge, Pennsylvania (both obelisks are patterned after the Washington Monument in Washington, D.C.). The Medal of Honor grove is maintained by the Freedoms Foundation and consists of 52 wooded acres with one acre donated to each of the states, Puerto Rico, and the District of Columbia. On each assigned acre sits an obelisk that holds the names of all the Medal of Honor recipients, the state seal, and a donor plaque from the corresponding state.

Washington State’s Medal of Honor Grove obelisk was dedicated on May 15, 1976. It was then suggested that in celebration of our nation’s 200th birthday that same year, a replica be erected on the state capitol grounds. The Medal of Honor Grove Fund Committee for the State of Washington, the same committee that had raised the $10,000 necessary for the monument in Valley Forge, quickly went back to its fundraising efforts. Soon the committee had secured the nearly $6,000 in private funding needed to help build the capitol grounds replica.

On November 7, 1976, the capitol campus’ very own Medal of Honor monument was dedicated in a ceremony complete with skydivers from the U.S. Air Force. This obelisk differs from the Valley Forge monument only because of the names it contains. The replica displays not only the names of Medal recipients who were born in Washington State or entered the service from this state, but also those who, at the time of dedication, resided in Washington or were residents when they died. 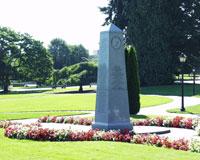 View a list of Washington Medal of Honor recipients.