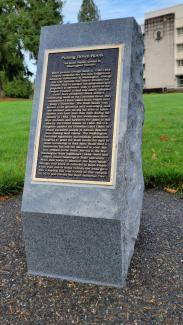 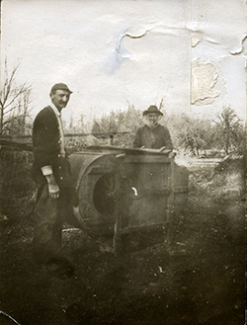 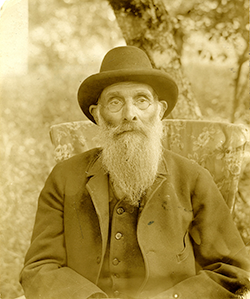 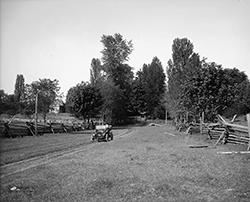 Black pioneer George Bush (c.1790-1863) helped establish the first non-Indigenous American settlement in Washington. George, his wife Isabella and others traveled the Oregon Trail to escape discrimination and prejudice in Missouri, only to arrive in the Oregon Country to find that newly adopted racist laws prohibited Black settlers.

Continuing north of the Columbia River, they established a farm called Bush Prairie near today's Tumwater. The Bush family was known to be generous and welcoming, and are credited with saving the lives of fellow settlers with food from their farm during the famine of 1852. This first settlement drew other pioneers and furthered the claim of this area by the United States. In 1850, the U.S. Congress passed the Donation Land Claim Act which excluded people of African descent from making land claims. The Washington Territorial legislature successfully petitioned Congress to grant the Bush family the right to retain ownership of their farm. Bush died a landowner but still not allowed to vote. His son, William Owen Bush, served in the first Washington State Legislature (1889-1890) and helped found Washington State University.

From their home in Missouri, the Bush family brought root stock to cultivate at Bush Prairie; a nut from one of those century-old trees grew into a sapling that was rooted on this campus in 2010 and named the Bush Butternut Tree.

George Bush was the first Black pioneer in the Washington Territory and helped establish one of the area's first non-Indigenous American settlements. His son, William Owen, was the state's first Black legislator.

George Bush was born in the late 1700s in Pennsylvania. He eventually settled in Missouri where he met and married his wife Isabella James, a German American woman. Together, the couple had six sons: William Owen, Joseph Talbot, Rial Bailey, Henry Sanford, Jackson January, and Lewis Nisqually.

In 1844, the Bush family began their journey from Missouri to Oregon across the Oregon Trail in hopes of escaping prejudice and discrimination. Bush was a primary financier of the party and co-led the expedition with white Irish American pioneer Michael Simmons. Simmons is credited with founding Tumwater, though the Bush-Simmons party arrived together and Bush was also key in its establishment. Simmons is already recognized on the Capitol Campus in the Territorial Sundial.

Slavery was abolished in the Oregon Territory in 1843. When Bush's wagon train arrived, they were hopeful to begin their new lives in a slave-free state. However, in 1844, the Oregon provisional legislature passed exclusionary laws that created a hostile environment for freed slaves and Black pioneers attempting to settle in the area. One of these laws, the "Lash Law," subjected Black people to regular whippings until they left the territory.

The Simmons family decided they would not settle in a place where Bush was not welcome, so they abandoned their plans to homestead in Oregon's Rogue River Valley. They wintered near Oregon City and then headed north of the Columbia River. The party hoped to settle far enough away in an area where the Lash Law wouldn't apply. In 1845, Bush and his family finally established their farm, called Bush Prairie, in the area that is now Tumwater. It was one of the first non-Indigenous American settlements in what became Washington state.

The Bush family found success and prosperity in their new home. They worked the land as farmers and raised award-winning wheat, traded with local Indigenous people, built sawmill and began a small logging operation. The Bush family were known for their generosity and have been credited with saving their neighbors during the famine of 1852. Prominent pioneer Ezra Meeker arrived in the area amid the famine and recalled Bush giving away nearly all of his year's crops to the starving emigrants.

In 1850, Congress passed the Donation Land Act which excluded people of African descent from owning property. However, because George Bush and his family were widely respected, the Washington Territorial legislature successfully petitioned Congress to allow the Bush family to retain ownership of their farm. Still, Bush was not allowed to vote.